A Glimpse of Our Collection 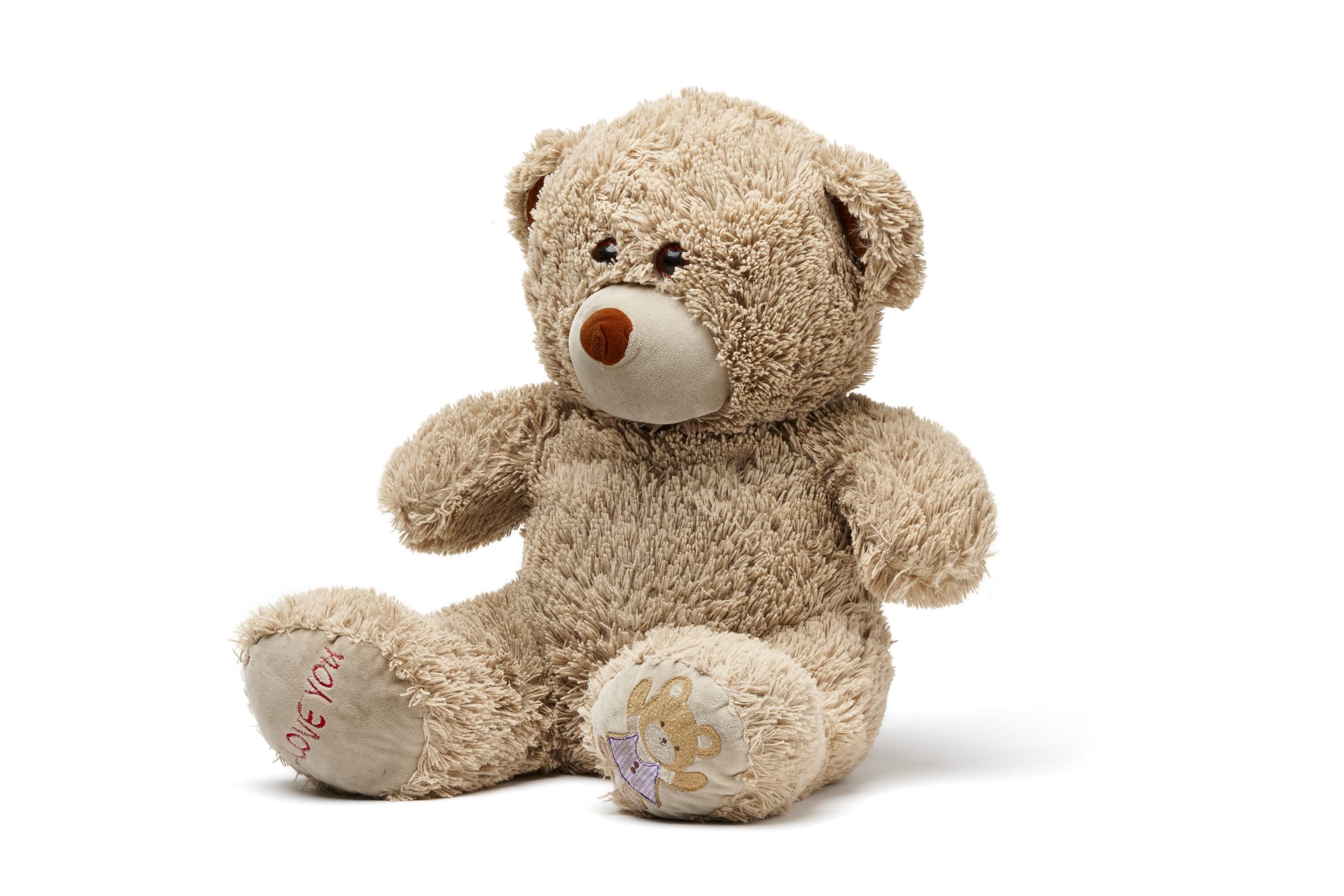 In 2014, I spent two and a half months in a hospital after having lost two fingers on my right hand. It happened when I picked up an unknown object from the ground – it turned out to be a fuse, and this triggered an explosion.

Mom bought me this teddy bear while I stayed at the hospital. She told me that it would keep me safe, and I believed her. Whenever I would hear shootings, I would curl up to the wall next to my bed and hug this teddy bear. As long as I slept with it, I felt that everything was going to be okay.

After coming home from the hospital, I was afraid to leave the house, I only went to school. With time, I started going out again with my friends, but I was still scared and always wearing a plaster cast. At school, I slowly began writing and drawing using my left hand. At first, it felt uncomfortable, but now it is as if I have always been left-handed.

When I enrolled in ballet, of course I wanted to stand on my tiptoes. I don’t know how I managed to wait until I was ten years old for my first pointe shoes! I got them from the theatre, just like all the other ballerinas in my class. Everyone got the “real” pink pointe shoes except for me. I got the white ones, and it made me sad. And jealous. Then my teacher explained to me what kind of pointe shoes they were. She told me that they were Sarajevo pointe shoes, produced in our city until the war started. The ballet students who practiced in them would become prima ballerinas of the Sarajevo National Theatre. These pointe shoes would never be made again. I didn’t become a prima ballerina of the Sarajevo National Theatre. Life took me in a different direction, but my great love for ballet lived on. My Sarajevo pointe shoes remain in a special place. 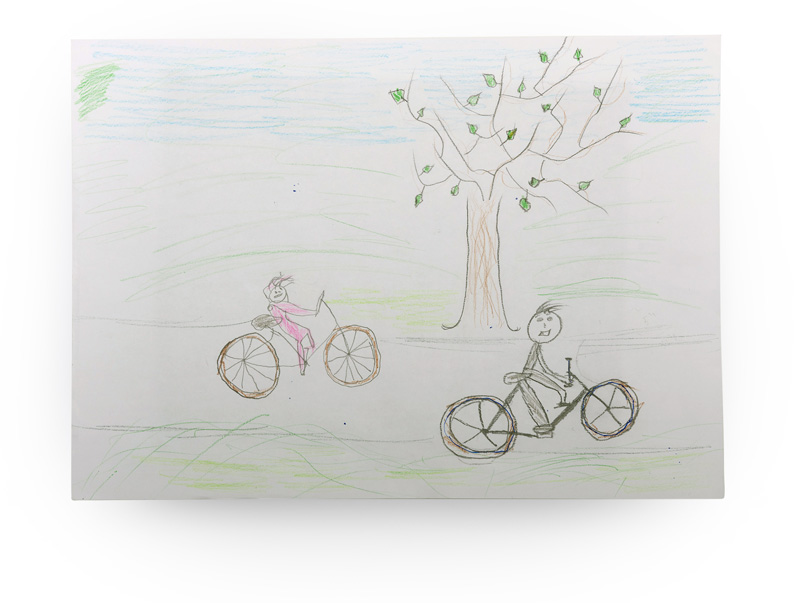 A Country for Playing Football

I was born in Kabul, Afghanistan. Since 2015, when we left, we have crossed Iran, Turkey, Bulgaria, and now we are in Serbia. My father used to be a police officer and the Taliban wanted him to join them. There was never peace in Afghanistan. I spent a lot of time at home, because my mother was afraid that the Taliban might come to recruit boys. When I could go out, I liked to ride my bike in the park and play football or any kind of game. We always played close to home, so that we could run if the Taliban came. I went to a private school and finished four grades. Just as I started the 5th grade, we left the country. I liked going to school. We all wore uniforms and had very short hair. I was a very good student. I understood things quickly. Now, I have forgotten a lot. Sometimes I can’t remember how something is said in Farsi. I’m in 6th grade now. I’m so busy in Serbia that I don’t even have enough time to sleep. After school, I take part in many different activities. I play football, go to workshops, learn crafts, play outside… I would like to live in Germany. I heard it was a good country for playing football.

Teddy Bear from My Girlfriend

I got this teddy bear from my girlfriend! Many girls liked me at school in Syria. One of them was Amira, and she gave me this teddy bear. I loved going to school. I had a lot of friends. We used to walk back from school together. We would head each to our own house to do homework, but we would soon meet up again to play on the nearby hill until the sun set. That was five years ago and then the war came to our region. Amira moved to Damascus, and we lost contact. I don’t know anything about her today. I always try to keep this teddy bear clean and neat. We left in 2015. In Lebanon, I started working in a grocery store to help my family pay rent. My mother wanted me to go to school. Now I work at the store from 8 to 12. Then I go back home to eat and get ready for school. In the evening, I am so tired that I go to bed right away. I don’t go out to play with other children anymore because I don’t have the time. I wish I had more time, and also a big garden where I could race through the trees and climb them.

I wanted to keep a memento of something completely new to Yugoslavia—humanitarian aid. We laughed about it at the time, thinking: Come on, by Monday everything will be back to normal. That’s the real reason why I kept that first tin. But the crisis wasn’t over by Monday, and more tins followed. Soon we were eating things that had never been seen before in Yugoslavia. It was an excellent reason to collect all those wrappers and tins. At one point as I was forming this collection I had to ask myself how long I would continue to do so. That’s when I decided to keep collecting either until I made it into the Guinness World Records or until the war ended and we stopped receiving aid. Thanks to the journalists who visited Sarajevo, I was able to send a letter to Guinness. I continued collecting wrappers as I awaited their response. Even though my collection made it into the record book, the number of wrappers is actually greater than the one listed by several hundred. We even erected a monument to ICAR in Sarajevo, but few remember that there were actually three different types of ICAR tin. Because of details like that one, collecting proved to be a good way to preserve our collective memory of that period. 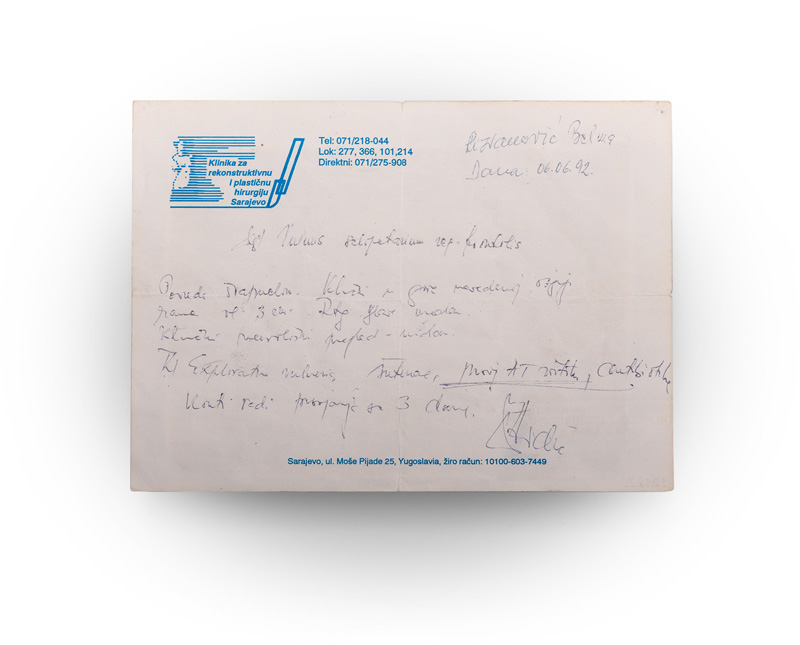 These are my medical results from when I was wounded. Diagnosis: survived by a hair. Prognosis: a fresh start at five years old!